Make the most of your time in Budapest by booking a 3-hour guided tour of the city with a 1.5-hour visit of Hungary’s Parliament. During this half-day tour, you’ll learn about the capital’s fascinating history and most prominent landmarks.

This tour combines our 3-hour guided tour with a visit of the Budapest Parliament. By combining both tours, you’ll save money and time. 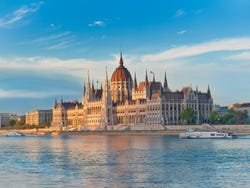 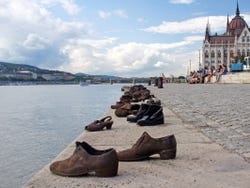 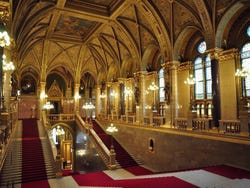 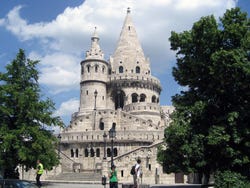 Greet your professional English-speaking guide at Báthory utca 19, and board a comfortable air-conditioned minibus. From Chain Bridge, head to Margaret Bridge and cross the overpass to Buda’s Castle District.

Take a guided walking tour accompanied by your guide and discover the striking Matthias Church followed by the Fisherman’s Bastion, one of the most impressive observation decks in Budapest. Climb back on the minibus and head to the top of Gellért Hill, home to the popular Citadella. It offers the best panoramic views of Budapest.

Next, cross Elisabeth Bridge until you arrive at the Central Market Hall, then you’ll drive past the Hungarian National Museum, the Great Synagogue and the City Park, where one of Budapest’s top thermal baths, zoo and theme parks are located. Hop off at Heroes’ Square and discover the plaza’s numerous sculptures.

Skip the long queues and walk straight into the imposing Parliament. Follow your guide through the building’s most relevant rooms like the Assembly Hall and the Central Hall, home to the Holy Crown of Hungary.

The tour comes to an end just outside the Parliament.

With this ticket, you'll avoid the lines that tend to form at the Budapest Parliament ticket office. Having said that, you will still have to line up to access the monument itself, and the security control may take a few minutes.

All of our providers comply with local legislation and applicable health recommendations to avoid the spread of Covid-19.

The activity takes place with a guide that speaks in english, although it may occasionally be done in two languages.

Skip the line entry and guided tour of the Budapest Parliament.

You can book up until 24 hours before the activity as long as there are still places. Book now to guarantee your spot.

All services published on Civitatis are carried out in accordance with our Sustainability Code. Specifically, this activity applies the following practices: Show more

from
US$ 54.50
No hidden fees or surcharges
Free cancellation up to 4 days before
Book

Free! Free cancellation up to 4 days before the day of the activity. If you cancel under this time or do not show up, you will not be refunded.

I wish the bus had taken us up the hill to the castle. There were several of us who were not able to climb 9 sets of stairs. I got up 4 and gave up.

I travelled by myself
6

Very short tour, for the price its better a hop on hop off. The last one its for 72 hrs and a trip boat for the danubio at night.

I travelled by myself
10

I travelled with my partner
6

I travelled with my partner
Show all the reviews
like

8 / 10 968 reviews
The best way to explore Budapest’s surroundings is by booking a full-day trip to three of the most picturesque towns on the Danube Bend: Esztergom, Visegrád and Szentendre.
US$ 67.80
Book
like

9.10 / 10 4,037 reviews
Budapest is one of the most beautiful cities by night with its dazzling attractions lit up. Take a 1-hour cruise along the Danube and enjoy breath-taking views.
US$ 23.10
Book
like

9.30 / 10 1,377 reviews
Explore Budapest from the water on a cruise along the Danube and enjoy breath-taking views of the city with pre-recorded commentary in English and free drinks.
US$ 16.50
Book