Discover the heroes of World War II with this Jewish Quarter Tour around Hungary's capital. Explore one of Budapest's must-see neighbourhoods while you find out about its abundant history. 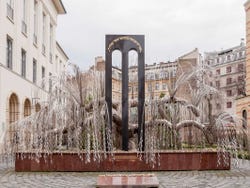 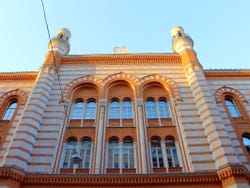 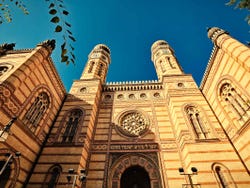 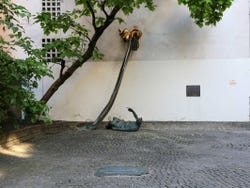 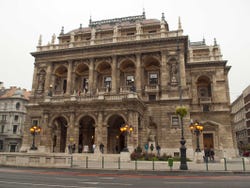 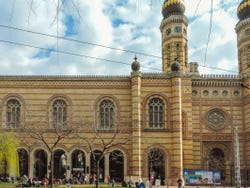 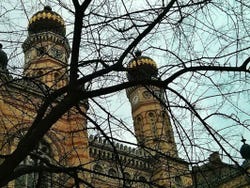 At 11 am we'll meet in the Great Synagogue of Budapest, the second largest in the world, and begin a tour around the Hungarian capital's Jewish quarter.

One of the important stops on the tour will be the exterior of the 19th century Great Synagogue, we'll admire the intricate details which reflect the mix of Byzantine, Romanesque and Gothic styles. During the Second World War, the surroundings of this temple were turned into a concentration camp. The next stop will be at the Raoul Wallenger Holocaust Memorial Park, a monument built to honour all the victims of the Holocaust.

Next, we'll go to the Carl Lutz Memorial. Did you know that Carl Lutz helped hundreds of Jews in Budapest to escape? it was the largest rescue operation of Jews during the Second World War. The sculpture was created to always remember the important Swiss diplomat.

The tour will also take us to the mural dedicated to the Spaniard Angel Sanz Briz. This painting was created by the artist Okuda in memory of the Spanish diplomat who saved the lives of 5,000 people by giving them a Spanish passport.

Later, we'll go to the Status Quo Synagogue and learn more about its history. This Mozarabic and Islamic place of worship was designed by the architect Otto Wagner. Then, we'll go to a building in Király Street to see the last remains of the Budapest ghetto in its courtyard.

To conclude the tour, we'll stop in front of the famous Budapest Opera House and discover its importance through the years while we appreciate its impressive facade.

At 1:15 pm, the Jewish Quarter tour will end at the Opera's entrance.

Please check local restrictions before traveling. All of our services comply with recommendations to avoid the spread of Covid-19.

The activity takes place with a guide that speaks in English.

English speaking guide with expert knowledge in the history of Budapest's Jewish Quarter.

You can book up until 36 hours before the activity as long as there are still places. Book now to guarantee your spot.

US$ 13.50
No hidden fees or surcharges
Free cancellation up to 48 hours before the service starts
Book

Free! Free cancellation up to 48 hours before the activity starts. If you cancel under this time or do not show up, you will not be refunded.

Magnificent, Carlos Paniagua has been guiding and informing us. He has clearly transmitted to us the experience of the Jews in the Budapest ghetto. We liked it very much. Opinion translated. Show original.

We did the tour with Marina and we recommend the experience 100%. Very interesting and very pleasant, in addition, the guide recommended several typical places to visit when we finished the tour. If we return to the city we would love to repeat with her Opinion translated. Show original.

I travelled with friends
10

We did the tour with Juan and he was great. We loved it Opinion translated. Show original.

I travelled with teenagers
10

We liked it a lot and we have learned a lot. Everything super well explained. Excellent!!!!! Opinion translated. Show original.

My friends and I did the tour with Carlos, without a doubt the best guide! We loved his way of telling the story and the passion with which he does it. From 10!!! Opinion translated. Show original.

8.50 / 10 631 reviews
Opened in 1913, Széchenyi Bath is one of the world’s most fascinating thermal baths. Relax in natural hot spring waters, saunas and outdoor swimming pools.
US$ 26.90
Book
like