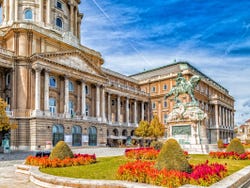 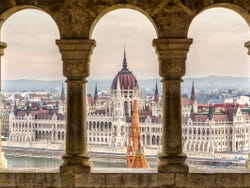 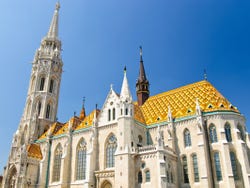 The tour meets in front of Matthias Church, by the Holy Trinity Column, to begin the tour of the breathtaking Buda castle complex, seat of power for the Hungarian royals since its construction by Béla IV in the 13th century.

Today, nothing remains of the original medieval castle, with the oldest remaining parts dating from the 14th century. This sprawling castle complex is one of the major tourist attractions in the city but one which, perhaps for its size and the number of tourists populating its cobbled streets, is best discovered with a guide showing you both the historically important and the lesser known sights.

From its very construction, when the capital of was moved from Esztergom to take high ground against the Mongol hordes, the castle has borne witness to great battles and power struggles, writing pages rich in history.

The Ottoman conquest, too, is written large over the castle area. The Vienna Gate, despite its appearance, a 1930s replica of a medieval original which was destroyed during the 1686 Siege of Buda as the Hapsburg army recaptured Hungary from the Turks. Traces of the occupation can be seen in the walls themselves, especially in the Anjou Bastion with its memorial to Adburrahman, the last Pasha of Buda.

The tour also rakes in Gothic towers, the Jewish Quater (where Beethoven once lived) and the famous Fisherman's Bastion, one of the most architecturally eclectic and romantic spots in the whole city.

Be sure to bring your camera: the views of Budapest across the Danube from the castle hill are truly picture-postcard, and worthy of immortalisation!

This tour takes in the Buda Castle area, with a specialist guide who will tell you all about the history of the castle. However the tour does not visit the inside of the castle.

The tour is exclusively in English.

Hotel pick up and drop off.

Book as soon as possible to guarantee availability, especially during public holidays and festivities.

You can book up until the previous day (12:00 PM local time) if there are still places available.

Once your booking has been confirmed, you will receive an email containing your booking voucher. Please print it out or download on your smartphone/tablet to show on the day of the activity.

If you still have more questions, check out our section on frequently asked questions. If you need help to book an activity or have any enquiries, please contact us.

Non refundable. You may not cancel this activity.

9.10 / 10 3,907 reviews
Budapest is one of the most beautiful cities by night with its dazzling attractions lit up. Take a 1-hour cruise along the Danube and enjoy breath-taking views.
US$ 20.70
Book
like

8.30 / 10 255 reviews
The Budapest Hop-On Hop-Off tour is the most practical and comfortable way to explore the Pearl of the Danube. Explore the city at your own pace.
US$ 16.30
Book