Originally, the City Park, like so many other estates, was a private royal hunting ground used by the nobility. During the eighteenth and nineteenth centuries, the area was gradually transformed into a public park.

What to see in the park?

The park includes many things to do, including the Budapest Zoo, a small theme park, the Széchenyi thermal bath and Vajdahunyad Castle.

Vajdahunyad Castle was firstly made from wood for the Millennial Exhibition in 1896. It became one of the favourite Expo attractions and thus, was rebuilt from stone. The building is a copy of several famous Hungarian landmarks that already existed at the time it was designed. The mansion houses the Museum of Hungarian Agriculture and a small, but pretty church.

Most of these sights, except the Castle, are to the left of Heroes’ Square.

The City Park also houses a lake, which depending on the time of year you will either be able to ice-skate on or explore by hiring a rowing boat.

Although people of all ages will enjoy visiting the City Park, if you are in Budapest with children, it should be one of your top places to go. 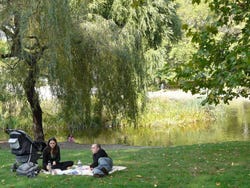 People having a picnic in the Budapest City Park 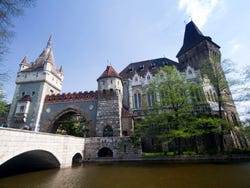 At the end of Andrássy Avenue. The entrance is on Heroes’ Square.

The Park usually comes to life on the weekends and especially during the morning.