The trolleybus network in Budapest is made up of 15 lines, numbered from 70 to 83. This means of transport is slower than a bus or a tram, as it usually slows down and sometimes accidentally switches off when it climbs certain very narrow and steep streets in Budapest.

When you get close to your stop, remember to press the button that is located near the door to warn the driver that you wish to get off.

In December 1949, the trolleybus line no. 70 replaced the tram line no. 10. This line was given the number 70 to celebrate Stalin’s seventieth birthday.

During the following years, the city created several other trolleybus routes to substitute the tram lines that ran through the city’s most narrow streets.

At the end of the sixties, the Government began to replace the old trolleybuses with urban buses, but the decision was retracted in the seventies, due to the rise of petrol.

During the nineties and at the beginning of the twenty-first century, Budapest bought new trolleybuses. However, the economic conditions prevented the city from establishing new lines.

Nowadays, trolleybuses are still viable and luckily, have not completely superseded all the tram lines.

If you would like more information on trolleybus ticket prices and other means of transportation in Budapest, check out our following article: 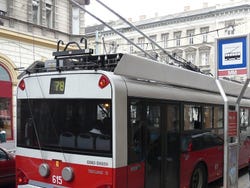 A trolleybus, not very common in other cities
1See photo gallery
Bus Funicular