Inaugurated in 1870, the Budapest Funicular was the second funicular to be built in Europe.

During World War II, the cable railway was partially destroyed. Years later, it was rebuilt exactly as it had been and was reopened in 1986.

Nowadays, the cliff railway works perfectly, running from the Chain Bridge to the top of Castle Hill, near Buda Castle.

In our opinion, the best way to get to the top of Castle Hill is by taking the Funicular and then walking back down.

Clark Ádám Square not only houses the Funicular, but also the city’s Kilometre 0. It is used to measure the distances in Budapest and Hungary.

The Budapest Castle Hill Funicular opens at 7:30 am and closes at 10 pm. Each journey costs 1.20 Ft (US$ 0) and you will get a small discount if you purchase a round ticket. 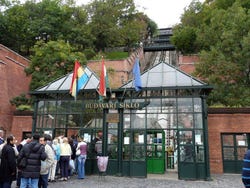