Budapest Metro has four lines and is relatively easy to use. Three of the four metro lines intersect only once, at Deák Ferenc Square.

Tips to keep in mind before using the Budapest Metro:

Information on the various lines and most significant metro stations:

Line 1 runs from Vörösmarty tér to Mexikói út. This line stops at numerous landmarks and museums, making it very useful for tourists.

It runs through Andrássy Avenue and stops at the Hungarian State Opera House, the Oktogon Intersection, Heroes’ Square and City Park. It also stops very near the Chain Bridge.

The Metro line 1 is one of the easiest lines to take since it is not very deep and; therefore, you will not have to walk down many stairs. In addition, its stations are curiously decorated.

It crosses Budapest from Buda’s Déli Pályaudvar (Déli Railway Station) to Pest’s Örs vezér Square. The most useful stations for tourists are Kossuth Square, where the Hungarian Parliament is located, Batthyány Square, which is the Fisherman’s Bastion metro stop and Astoria, the closest station to the Great Synagogue.

You will find this route useful if you take the bus 200E from the Airport to the city centre. The bus's final destination is Köbánya-Kispest, which is the first Line 3 metro station.

Opened in 2014, the metro line 4 runs for 4 miles (7 kilometres). It connects the two main railway stations in the city: Keleti Railway Station and Kelenföld Railway Station.

Budapest Metro opens every day at 4:30 am and runs until 11 pm. The trains pass every 2 to 15 minutes depending on the time of day.

BKK, Budapest's public transport company issues the same tickets and travel passes for all of the city's transport system. Moreover, transport in Hungary's capital always costs the same. Check out the following article for more information on the transport tickets and passes: 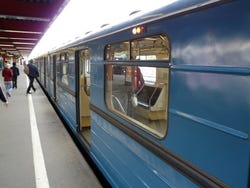 One of the line 3 metro trains 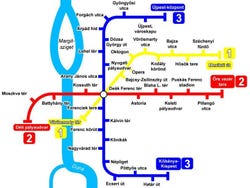