The Holocaust Memorial Centre's permanent collection is called “From deprivation of rights to Genocide”, and it reflects the history of the Jewish people in Hungary and the Holocaust. From 1938, the Hungarian state had gradually begun to strip the Jewish community of their property, wealth and basic human rights. After the German occupation in 1944, the state took the Jews’ land, houses and businesses and locked them up in ghettos and working camps, from which they were then deported to the extermination camps.

Thanks to the museum’s labels, screens and interactive presentations, visitors will get a real sense of how the persecution of the Jewish community began and how it evolved until they were sentenced to death in one of the various death camps.

A beautiful synagogue that has been meticulously restored thanks to nineteenth-century photographs is the last attraction that visitors can explore in the Holocaust Memorial Center.

We have been to several Holocaust museums around the world, but in our opinion, this is the best in its field. Its architecture is astonishing, it is meticulously designed, with interesting items and startling information.

All the information is in English, making this museum even more frightful since you will be able to read all the individual and family stories relating the persecutions. 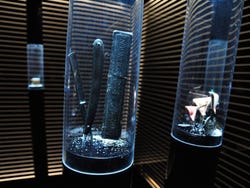 Exhibition in the Holocaust Memorial Center 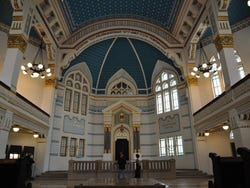