The Origins of Budapest

The history of Budapest begins with the oldest city, Obuda, occupied by Celtic tribes until the conquest of the Romans in the 1st century BC.

Obuda, which the Romans called "Aquincum", was founded in the year 89 on an ancient Celtic settlement. For four centuries it was the capital of the Roman region of Pannonia. Aquincum comes from the word "aqua" (with water), in honor of the numerous thermal springs that Budapest is so famous for.

Buda was born as a Roman colony and its foundation was established around 14 BC.

In 896, seven Magyars tribes came together and defeated the Romans. They conquered the area and settled in Aquincum. Centuries later, in the thirteenth century, the settlement was called Óbuda and two separate cities began to develop on either side of the Danube River.

In 1241, the Mongols invaded the area and both cities were completely destroyed. King Bélv IV of Hungary commissioned both towns to be rebuilt and during this period, Buda was founded opposite Óbuda.

Buda became the capital of the Kingdom of Hungary in 1361 and between the fourteenth and fifteenth century, the city developed greatly, decreasing after the reign of Matthias Corvinus, King of Hungary and Croatia.

Pest was conquered by the Ottoman Empire in 1526, followed years later by the siege of Buda in 1541. Buda was made capital of the Budin province during the Ottoman rule, while Pest declined and was practically abandoned. The Turks remained in power until 1686, year in which they were defeated by the Habsburg and Buda became part of the Habsburg dominion.

During the Habsburg rule, both cities began to develop again and many churches and landmarks were built during this period. In 1784, Joseph II established the Institutum Geometricum as part of the Faculty of Liberal Arts at the University of Buda. Count Széchenyi led a movement of progress in both cities and in 1849, the first permanent bridge was constructed connecting Buda and Pest. It is known as the Chain Bridge.

As a consequence of the Enlightenment which dominated Europe’s ideas during the eighteenth century, several revolutions took place in the Austrian Empire including the Hungarian Revolution of 1848. The Hungarian population revolted against the Austrians, but were quickly defeated and the Habsburgs regained control over Hungary.

In 1867, the Austro-Hungarian Empire was established after the Austro-Hungarian Compromise of 1867 was signed. Hungary, in general, and Buda and Pest, in particular, benefited greatly from this union and enjoyed rapid growth and progress. Pest became the political, economic, and trade hub in the area, and in time, it became the most populated area.

Unification of Óbuda, Buda and Pest

Óbuda, Buda and Pest were unified into one single city in 1873, naming the city Budapest. After Vienna, it became the second main city in the Austro-Hungarian Empire.

After World War I, the Allies and the Republic of German-Austria signed the treaty of Saint-Germain-en-Laye. The Austro-Hungarian Monarchy renounced its rights over Hungary and the two countries were separated, creating an independent Hungarian state.

The Treaty of Trianon was signed in 1920. This peace agreement was imposed on Hungary by the Allied powers after the fall of Bela Kum. The country lost control over Slovakia, Ruthenia, Transylvania, Croatia and Banat of Temeswar. In total, Hungary lost over two thirds of its territory and Budapest became a capital which was too large for its small state.

During World War II, Budapest was bombed by the Allied Forces and greatly damaged. Between 1944 and 1945, the Soviets occupied Hungary and made sure the country was governed by the Communist Party before handing the power back to the Hungarians. Nevertheless, the Soviet forces remained in Hungary.

In October 1956, the Hungarians revolted against the Government and the Soviet influence, but were crushed by the Soviet troops.

After decades of oppression, the Soviet Union collapsed in 1989, which meant for Hungary the end of Communism and a transition to democracy and its independence.

In 2004, Hungary became a member of the European Union. 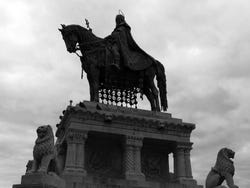 St Stephen on the Fisherman's Bastion 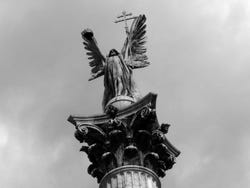