Rudas Thermal Bath was constructed in three different periods. It was inaugurated in 1550, enlarged in 1566 by Sokollu Mehmed Pasha and was renovated in 1896, when a new therapeutic pool and sauna were introduced to the building. The last renovation took place during the twenty-first century, reopening at the beginning of 2006.

The most iconic part of Rudas Thermal Bath is its main hall. This room, created in 1566, has an Ottoman octagonal pool, four water pools at various temperatures, all covered by a traditional 10-meter Turkish-style dome held up by eight pillars.

When the Thermal Bath was first built, it was only open to men. Women were first allowed access during the mid-twentieth century. In the past few years, the spa has been opened on the weekends for both women and men.

Keep in mind that wearing a swimsuit during the weekend is obligatory. However, from Monday to Friday, it is not compulsory. 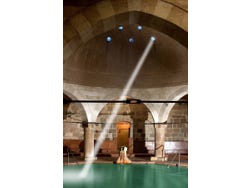 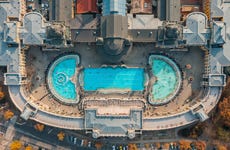