Among the many pastry shops and cafés, there are a few that stand out not only for the quality of their desserts but also for their rich history and practice.

Gerbeaud is legendary. The Café was founded in 1858 by Henrik Kugler and since then its pastries and cakes have become increasingly well-known. This traditional coffee house seats up to 300 people in its many saloons and its terrace also has the same capacity.

The New York Café was one of the most renowned and striking coffee houses in Budapest. It was inaugurated in 1894 and closed in 2001 for the construction of the Boscolo Hotel.

Budapest's Centrál Café is one of the oldest cafés and restaurants in Budapest. In the past, many artists, poets, and writers met in this café to share and discuss ideas. However, it was closed down during the Communist regime, but coinciding with the fall of the Soviet Union, the Café reopened. It's slightly cheaper than the other two previously mentioned. 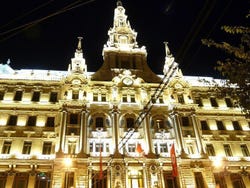 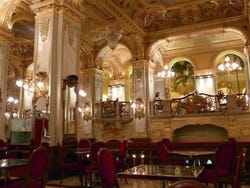 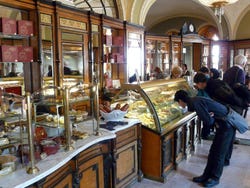 Café Gerbeaud, the most famous bakery in Budapest
3See photo gallery
Where to Eat 2-Day Itinerary